This is the story of the B-24 Liberator Hot Stuff, the first heavy bomber in the 8th Air Force to complete 25 missions in Europe in World War II and, after completing 31 missions was selected to return to the United States on May 3, 1943 to tour the country and help sell war bonds. It is also the story of Lt. Gen. Frank M. Andrews, Commander of the European Theater of Operations. He needed to get back to Washington, DC. He knew HOT STUFF'S pilot Capt. "Shine" Shannon and chose to fly back to the United States with him.

When HOT STUFF arrived to pick up Gen. Andrews at Bovington Field, England, Capt. Shannon was surprised that Gen. Andrews had his staff, two Army chaplains and a Civilian Methodist bishop with him. There were not enough seats for everyone on the airplane so five crewmembers including the bombardier, Lt. Robert Jacobson, copilot, john Lentz and three gunners were bumped to make room for Gen. Andrews and his entourage. HOT STUFF had a scheduled refueling stop in Iceland but crashed into a mountain in bad weather. All onboard were killed except the tail gunner, Sgt. George Eisel. Hot Stuff's accomplishment was hushed up and soon forgotten. On May 19, 1943, three and a half months after HOT STUFF completed 25 missions, the B-17 Flying Fortress MEMPHIS BELLE was recognized for doing the same with much fanfare. HOT STUFF and the MEMPHIS BELLE flew on the same mission to Wilhelmshaven, Germany on March 22, 1943. HOT STUFF was on her 30th mission, the Memphis Bell was on her 10th mission.

Gen. Andrews was to be notified on May 3, 1943, the day HOT STUFF crashed, that he had been selected to lead all forces across the English Channel for the invasion of Europe. He was killed before he received the message. The job was later given the name Supreme Allied Commander and assigned to Gen. Dwight David Eisenhower seven months later in December 1944.

Gen. Andrews, was recognized as a great leader and one of the Fathers of the United States Air Force. Gen. Andrews was honored after the war when Camp Spring Army Airfield in Maryland was renamed Andrews Field (now Joint Base Andrews) but soon after, was nearly forgotten. After the crash, HOT STUFF, her crew and others onboard, were forgotten.

Jim Lux, with the help of Icelanders, Thorsteinn and Olafur Marteinsson, recovered pieces of HOT STUFF wreckage in June 2012 and many of those pieces are now on display in the National Museum of the United States Air Force, in Dayton, Ohio, the Veterans Museum and Memorial Center in San Diego, California and Joint Base Andrews, where the President's airplane Air Force One is base near Washington, D.C.

HOT STUFF and her crew, Gen. Andrews and those killed in that horrific accident rightfully deserve to be remembered for their heroic accomplishments. United States Ambassador to Iceland, Luis Arreaga agreed and worked with Jim Lux, a member of the 93rd Bombardment Group Association and Iceland government officials to have a memorial monument constructed near the crash site to honor those who lost their lives in the accident.

A memorial monument site was selected and approved by the town of Grindavik. The site is located along a highway with the mountain where the crash occurred in the background. It is also located near the Blue Lagoon, the biggest tourist attraction in Iceland. A memorial plaque was completed and unveiled at the site on May 3, 2013, the 70th anniversary of the accident. A flyby and missing man formation was included as part of the unveiling ceremony. A memorial service took place at the Andrews theater in Keflavik after the unveiling. President of Iceland Grimsom, U.S. Ambassador Luis Arreaga spoke and a letter from USAF Chief of Staff Gen. Mark Welsh was read during the service.

A six year effort to raise funds for the monument was completed in 2018 and it was dedicated on May 3, 2018, the 75th anniversary of the accident. More than 140 Americans made the trip to Iceland for the unveiling. Many of them were family members of Hot Stuff's passengers and crew. An Iceland band played the national anthems of Iceland and the United States of America. The United States Air Force provided an honor guard and Lt. Gen. Richard Clark, Commander of the United States Air Forces in Europe and Africa, Col. E. John Teichert, Commander of Joint Base Andrews, United States Embassy ChargÈ d' Affairs, Jill Esposito, Iceland Minister of Foreign Affairs, Gudlaugur Thor Thordarson and Monument Project Manager, Jim Lux participated in the dedication ceremonies. Two wreathes were placed by the monument, taps were played and a United States Air Force B-52 Stratofortress and a Iceland Coast Guard helicopter made passes over the monument. A memorial service was held in Andrews Theater in Keflavik after the dedication.

Lt. Gen. Frank M. Andrews, a great military leader and the heroic crew and passengers who died on board Hot Stuff will be honored and remembered for as long as the monument stands. 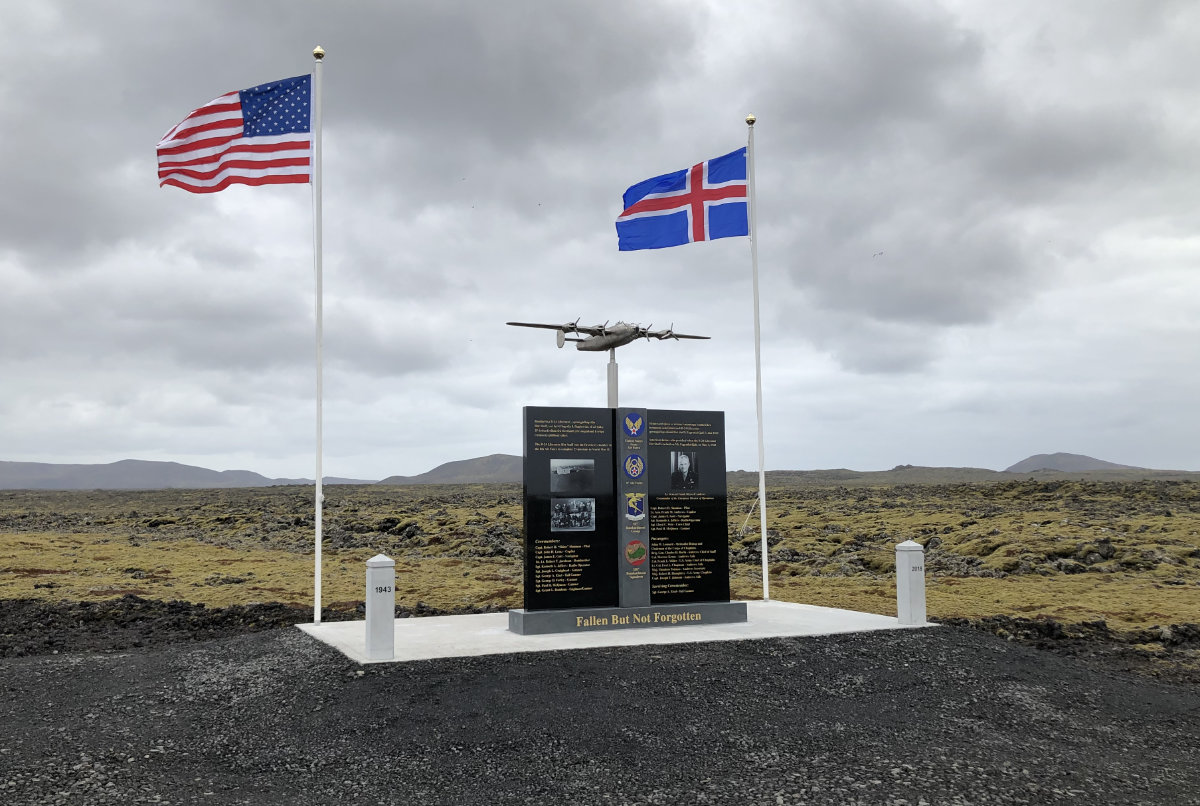