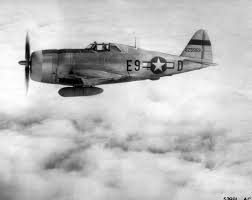 Aircraft #24 and #26 from USAAF 33 Fighter Squadron were on routine patrol flight over Faxaflói when the propeller governor on Aircraft #26 failed. The propeller was out of control in over speed and in a short time the engine speed was uncontrollable. The pilot decided to bail out. The Aircraft landed on sand beach of the river Hvítá. The pilot landed close to the Aircraft with a bad knee injury. The Aircraft was totally destroyed.